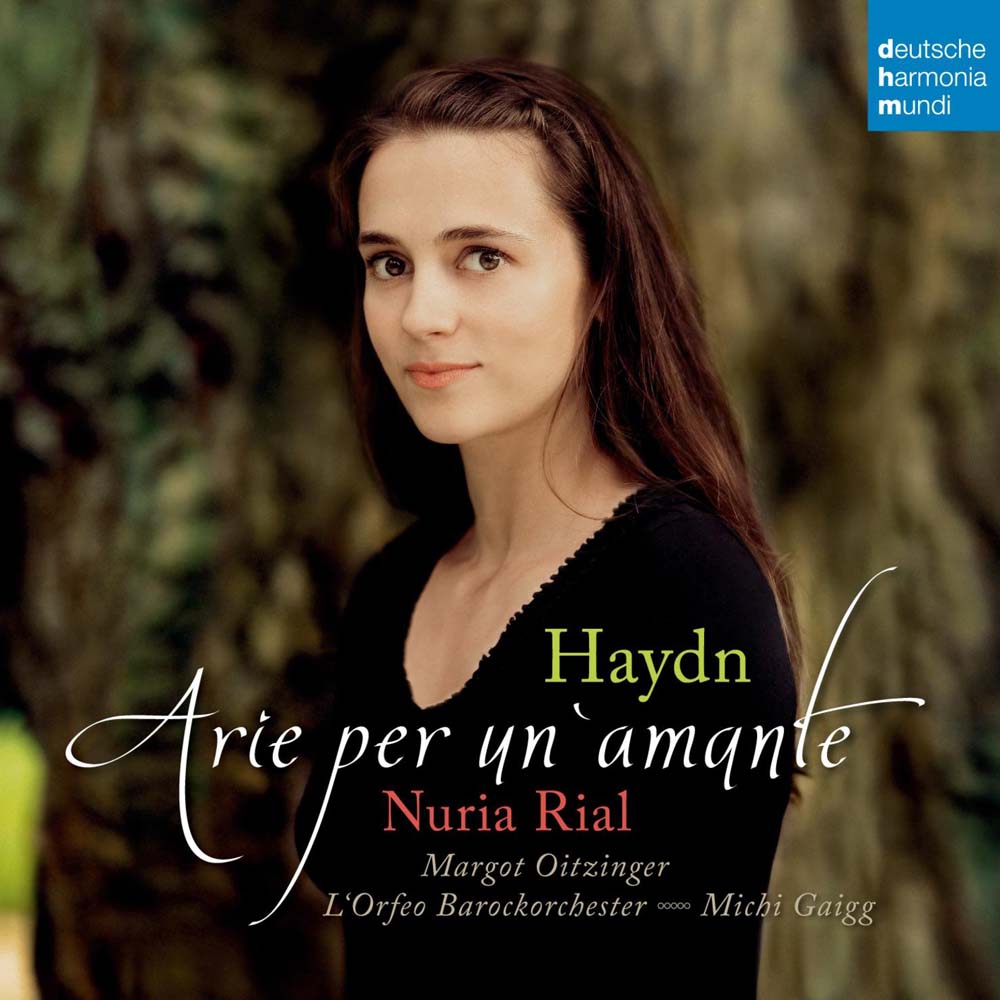 Haydn’s amorous sighs
The music on this CD introduces a whole specrum of witty, demanding, self- assured and fickle women. We owe this to the experienced opera singer Nuria Rial with her light and utterly unacademic natural voice. She shares the arias on this CD with the mezzo soprano Margot Oitzinger. Not to mention the mischievous fun that the orchestra conveys. The accompaniment is played with character and wit. Reminding the listener of a nervous opera overture the recital starts with a movement from a Haydn symphony. The clear articulation, the revelling dissonances, the purposeful and often cheeky dialogues, rich colours and dynamic nuances make this clever performance into a huge pleasure.
KlassikInfo.de

Charming
Nuria Rial […] sings with beautiful lightness and with the finest timbre. Her voice seems to have it all: vocal brilliance and perfect intonation, playful charm and flirtatiousness, amorous coyness. […] The L’Orfeo Barockorchester accompanies with clear articulation and an obvious enjoyment of Haydn’s many dynamic and harmonic surprises. The opening movement from the symphony unleashes an emotional storm. Excellent sound quality and balance between the singer and orchestra.
Fono Forum, Werner Pfister, July / August 2009

Natural grace
The name of this CD, „Arie per un amante“, leads the potential lover further than he expected. He finds here, apart from the Haydn arias with the beautiful voices of Nuria Rial (Soprano) and Margot Oitzinger (Mezzo soprano), a ravishing opening of the recording: Haydn’s Symphony in G major. The L’Orfeo Baroque Orchestra, directed by Michi Gaigg, proves that Haydn can’t be labelled as a „portly papa“. He was this neither as a composer, nor as a person and definitely not as a man. He is reputed to have not been indifferent to the charms of other women, especially in the context of his chronically bad-tempered wife. This might be the reason that so many wonderful arias for a female voice were composed by him, especially those for his longstanding mistress Luigia Polzelli. Rial and Oitzinger provide all that is needed for this repertoire: natural grace, a feeling for style and that specific slight sense of humour which Haydn’s music thrives on.
Crescendo, Teresa Pieschacón Raphael, 06-08/2009

[…] The second excellent (and unexpected literary) message from Haydn is delivered by the violinist and conductor Michi Gaigg. The CD contains 12 „Arie per un’ amante” (from Hob. XXIVb), an aria from Hob. XXXII/1b and the first movement from the G major Symphony No. 81. One has seldom heard such careful contrast between soft and dramatic playing, highlighting Haydn’s arioso qualities and his symphonic mind. Added to this is the sweet charm of the soprano Nuria Rial with her versatile diction.
Peter Cossé, The Record Geijutsu (Japan) 07/2009; Klassik Heute – Hörführer, 11 June 2009; Osterreichische Musikzeitschrift 06/2009

Oitzinger’s performance is very impressive as far as clarity and expression is concerned. She easily manages the quick changes in colour and range in „La moglie quando è buona“. Also Nuria Rial adorns this music with a freshness which makes one wonder why on earth Haydn’s theatrical vocal music isn’t given more attention.
The L’Orfeo Baroque Orchestra plays with wonderful alertness from the first Vivace from Haydn’s Symphony No. 81 up to the very last bar in „Son pietosa“. They revel in details, the strings balance between a slender, elegic, mild, vital and proud sound. Haydn’s subtle rhythms begin to move, noble flute sounds are embedded in soft phrases. Also the oboe solo in „D’una sposa meschinella“ leaves nothing to be desired, starting with subtle melancholy and changing into the dooming allegro.
Opernwelt, Christoph Vratz, 05/2009

The accompaniment of the L’Orfeo Baroque Orchestra, conducted by its co-founder Michi Gaigg, ist colourful and precise. The orchestra always finds the perfect blend of sweet charm and sharp accents ( one has seldom heard such a furious Vivace – from the Symphony No. 81 in G major – presented here as Overture) […] A truly enchanting CD, nobody will regret this purchase.
Klassik.com, Andreas Schubert, 11 April 2009

Joseph Haydn in Perfection
What an immense sensibility Michi Gaigg shows with every piece she conducts! For example these arias that Haydn composed for his mistress Luigia Polzelli: nothing is done merely for the sake of effects. On the contrary, the score is just read very carefully. In the process it is filled with an astounding freshness and elegance. Add the young soprano Nuria Rial with her impeccable intonation and her glowing timbre and total addiction sets in. An insurpassable recording!
Wiener Zeitung, 26 March 2009

A stroke of luck
Nuria Rial is definitely no secret anymore. Her recordings for Deutsche Harmonia Mundi with Handel’s “Riccardo Primo” and “Duetti amorosi” have already been highly acclaimed by international critics. On this new CD she sings with a clear and bright timbre, elegance and honesty, allowing the seemingly simple arias to come to life, making the listener addicted. A welcome counterpoint is set with the fiery Margot Oitzinger. The L’Orfeo Baroque Orchestra’s accompaniment is spirited and sensitive. All of a sudden one understands why Joseph Haydn himself was so proud of his vocal music.
Ö1 Apropos Oper, Chris Tina Tengel, 26 March 2009

[…] the most loving recording of this Haydn anniversary.
Brigitte, Stephan Bartels, 11 March 2009

Nuria Rial here deals with the arias that Haydn composed and added for his court performances of some of his colleagues’ operas. She does this attractively and with charm, even adding the odd gentle portamento, inspite of slight blemishes in the intonation. What the gentle Nuria Rial lacks in ardency is contributed by Margot Oitzinger on this CD. She presents a few arias for mezzo soprano with a pleasantly dark but clear timbre without excessive vibrato. Both singers are accompanied excellently by the L’Orfeo Baroque Orchestra and Michi Gaigg. They are flexible enough to accompany Nuria Rial with a gentle distance, yet adding stronger accents with Margot Oitzinger.
Rondo, Michael Wersin, 03/2009